Officers Richard VAOW and Patrick GILL were awarded commendations by the Forty Fort Police Department on 01/06/2023.  Officer VAOW was commended for his actions while assisting Swoyersville PD with a male who threatened a neighbor with a knife.  The male then threatened police with two handguns while shouting at police to shoot him.  The male barricaded himself in a garage, causing police to evacuate the surrounding homes.  Officer VAOW is trained in Crisis Intervention and attempted to de-escalate the volatile situation.  Officers were eventually able to Tase the male and take him into custody.  Officer VAOW's actions during a dynamic incident - without regard for his own personal safety - resulted in an armed, suicidal/homicidal person being taken into custody without injury to the suspect, officers, or civilians.

Officer GILL was commended for his actions while helping Wyoming PD arrest a combative DUI suspect.  Two other people attempted to intervene in the arrest and free the DUI suspect.  Officer GILL acted swiftly and without hesitation during a chaotic situation, engaging with three people simultaneously, including two who actively resisted arrest. He used the minimum force necessary to effect the arrests and then de-escalated the situation once the suspects were in custody.  He remained calm and professional throughout the incident.

The actions of both officers reflect great credit upon themselves, the Forty Fort Borough Police Department, and the law enforcement profession. 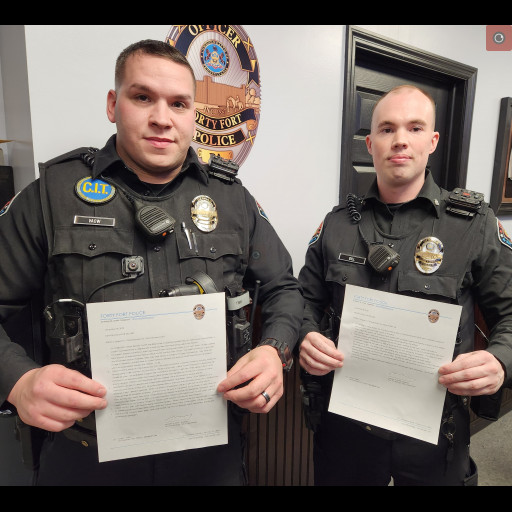